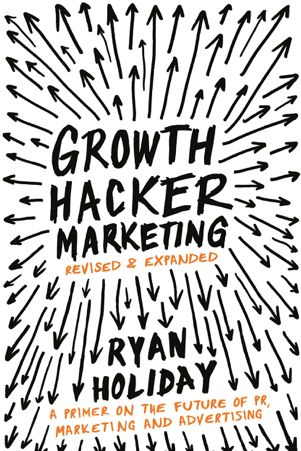 A new generation of megabrands like Facebook, Dropbox, Airbnb, and Twitter haven’t spent a dime on traditional marketing. No press releases, no TV commercials, no billboards. Instead, they rely on a new strategy—growth hacking—to reach many more people despite modest marketing budgets. Growth hackers have thrown out the old playbook and replaced it with tools that are testable, trackable, and scalable. They believe that products and businesses should be modified repeatedly until they’re primed to generate explosive reactions.

Bestselling author Ryan Holiday, the acclaimed marketing guru for American Apparel and many bestselling authors and multiplatinum musicians, explains the new rules and provides valuable examples and case studies for aspiring growth hackers. Whether you work for a tiny start-up or a Fortune 500 giant, if you’re responsible for building awareness and buzz for a product or service, this is your road map.

Lesson 3: Make your product go viral by letting customers market it for you.